With less than a week to October 5, the official release date of Windows 11, Microsoft has rolled out the modernized Paint app to Windows Insiders on the Dev Channel.

It has been redesigned to go with the Windows 11’s overhauled user interface (UI), with components like the toolbar being brushed over with more of the Microsoft Fluent Design system that informed the refreshed Paint app icon, as well as rounded edges on the window.

The users will be able to download the Paint app which no longer ships with the operating system itself. The classic Paint app was on the verge to be chopped and to be replaced by Paint 3D just few years back, but Microsoft also cut Paint 3D from the apps pre-installed on new devices and clean installs of Windows 11.

In the newly redesigned app, there are rounded corners on the window and new Fluent toolbar icon designs, a rounded colour palette, new drop-down menus for Paint creating and editing tools, and a simplified toolbar.

The new “A” icon in the toolbar next to the paint-fill icon makes it easier for Paint users to add text to creations. 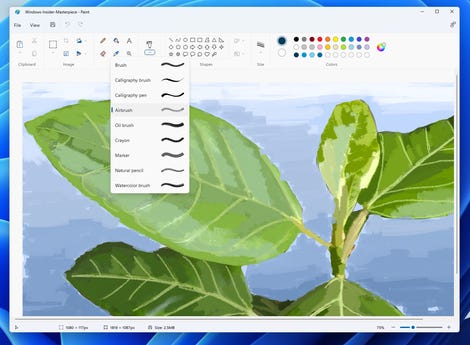 Other upcoming additions in Paint’s pipeline include a dark theme, a centered canvas, and refreshed dialogs that will be updated soon.

Paint is not the only app being redesigned for Windows 11. Several that come with Windows 11 pre-installed, such as the Calculator app and built-in Mail and Calendar Windows apps, have been refreshed, including with rounded corners.

Skype, too, won’t be pre-installed on new Windows 11. However, it also got a visual revamp. It came by default in the Windows 10. Microsoft these days seems more focused on Teams for consumers and enterprise.