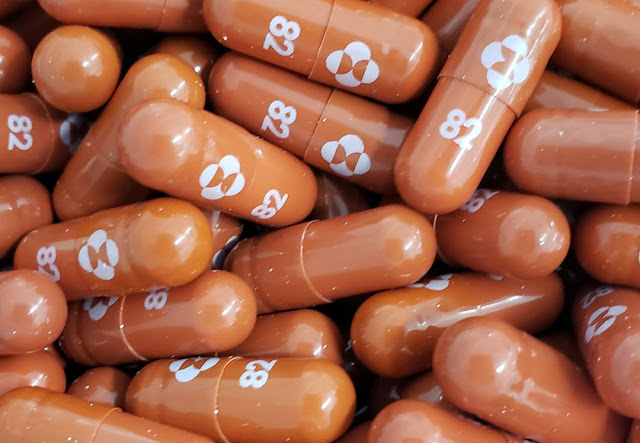 Merck’s experimental oral drug for COVID-19, molnupiravir, reduced by around 50% the chance of hospitalization or death for patients at risk of severe disease, according to interim clinical trial results announced on Friday.

Merck and partner Ridgeback Biotherapeutics plan to seek U.S. emergency use authorization for the pill as soon as possible, and to submit applications to regulatory agencies worldwide. Due to the positive results, the Phase 3 trial is being stopped early at the recommendation of outside monitors.

“This is going to change the dialog around how to manage COVID-19,” Robert Davis, Merck’s chief executive officer, told Reuters.

If authorized, molnupiravir, which is designed to introduce errors into the genetic code of the virus, would be the first oral antiviral medication for COVID-19.

Rivals including Pfizer Inc and Swiss pharmaceutical Roche Holding AG are racing to develop an easy-to-administer antiviral pill for COVID-19 but so far, only antibody cocktails – which have to be given intravenously – are approved for treating non-hospitalized COVID-19 patients.

“Antiviral treatments that can be taken at home to keep people with COVID-19 out of the hospital are critically needed,” Wendy Holman, Ridgeback’s CEO, said in a statement.

In the trial, which enrolled patients around the world, molnupiravir was taken every 12 hours for five days.

The study enrolled patients with laboratory-confirmed mild-to-moderate COVID-19, who had symptoms for no more than five days. All patients had at least one risk factor associated with poor disease outcome, such as obesity or older age.

Merck said viral sequencing done so far shows molnupiravir is effective against all variants of the coronavirus, including highly transmissible Delta.

The company said rates of adverse events were similar for both molnupiravir and placebo patients, but did not give details of the side effects.

Merck has said data shows molnupiravir is not capable of inducing genetic changes in human cells, but men enrolled in its trials have to abstain from heterosexual intercourse or agree to use contraception. Women of child-bearing age cannot be pregnant and also have to use birth control.

Merck said it expects to produce 10 million courses of the treatment by the end of 2021, with more doses coming next year.

The company has a U.S. government contract to supply 1.7 million courses of molnupiravir at a price of $700 per course.

CEO Davis said Merck has similar agreements with other governments worldwide, and is in talks with more. The company said it plans to implement a tiered pricing approach based on country income criteria.

Merck has also agreed to license the drug to several India-based generic drugmakers, which would be able to supply the treatment to low- and middle-income countries.

Molnupiravir is also being studied in a Phase 3 trial for preventing coronavirus infection in people exposed to the virus.

Merck officials said it is unclear how long the FDA review of the drug will take.

“I believe that they are going to try to work with alacrity on this,” said Dean Li, head of Merck’s research labs.