This article is published with ProPublica, the nonprofit investigative newsroom.

When inconvenient news erupts on the Chinese internet, the censors jump into action.

Twenty minutes was all it took to mobilize after Peng Shuai, the tennis star and one of China’s most famous athletes, went online and accused Zhang Gaoli, a former vice premier, of sexual assault.

The allegation reached the heights of Beijing’s opaque political system, and officials turned to a tested playbook to stamp out discussion and shift the narrative. The tactics have helped Beijing weather a series of political crises at home in recent years, including the 2019 protests in Hong Kong and its initial response to Covid-19.

This time, according to analyses by The New York Times and ProPublica, China began a multifaceted propaganda campaign that was at once sophisticated and clumsy. Inside the country, officials used internet controls to scrub almost all references to the accusation and restrict digital spaces where people might discuss it. At the same time, they activated a widely followed network of state-media commentators, backed by a chorus of fake Twitter accounts, to try to punch back at critics abroad, the analyses show.

The effort didn’t always succeed. This is how China reacted — and how it stumbled along the way.

At home, remove all traces

First, the censors quickly expunged Ms. Peng’s allegations, which she posted on Weibo, China’s version of Twitter. Then they scrubbed away other posts referring to Ms. Peng’s claims. They cast an expansive net, for a while even limiting conversations around topics as broad as “tennis.”

A banner appeared in a Weibo tennis forum, warning: “Due to violation of community guidelines, it is temporarily prohibited to post in this Super Topic space.”

In total, the authorities banned several hundred keywords, according to Xiao Qiang, a researcher on internet freedom at the University of California, Berkeley. That treatment is reserved for highly sensitive topics such as the 1989 crackdown on Tiananmen Square, Mr. Xiao said.

Even as the censors broadly muted discussions, they were careful to leave some references to Ms. Peng. They kept Ms. Peng’s account on Weibo, but made it nearly invisible by removing it from search results. They disabled comments on Ms. Peng’s posts, and on other older articles that mentioned her name. The tactic effectively closed off digital forums where the curious might discuss the accusations.

Officials have deleted the accounts of other prominent celebrities, sports stars and intellectuals who have fallen afoul of China’s government, but Ms. Peng’s case is different, Mr. Xiao said. Her allegations had already received widespread attention and she did not take a direct stand against the government itself, making it more difficult to simply erase her online presence entirely, he added.

Abroad, say nothing — until you can’t

Beijing can obliterate discussions it doesn’t like on the Chinese internet, but outside the country, the propaganda apparatus has to take a different tack.

For domestic political scandals, the strategy is usually to stay silent and hope international attention blows over. This time it didn’t. When Peng Shuai vanished from public life for nearly two weeks after making the allegation, the Women’s Tennis Association and some of the world’s top tennis players, including Naomi Osaka and Novak Djokovic, publicly raised concerns about her safety. Soon the hashtag #WhereIsPengShuai was ricocheting across global social media.

On Twitter, the foreign arm of China’s state broadcaster, China Global Television Network, or CGTN, posted a screenshot of what it said was an email from Ms. Peng denying the sexual assault accusations and asking to be left alone.

The email backfired, drawing more scrutiny and concern. People pointed out that the prose was stilted, and in the image of the email, a cursor was visible, raising questions about who wrote the text.

A cursor is visible in the image of the email, as seen in the highlighted portion here.

When Beijing faced widespread condemnation for its crackdown on Muslim Uyghurs in the far western region of Xinjiang, it started a coordinated campaign of videos showing locals denying abuses against their community.

With Ms. Peng, it also turned to visuals to show all was well. But this time, officials tried to respond to an international outcry over Ms. Peng without acknowledging that anything was amiss. The highly stage-managed strategy has come across as clumsy, further feeding international skepticism.

First, a reporter with CGTN, the state broadcaster, posted photos of Ms. Peng that he said were from the tennis star’s personal WeChat account. 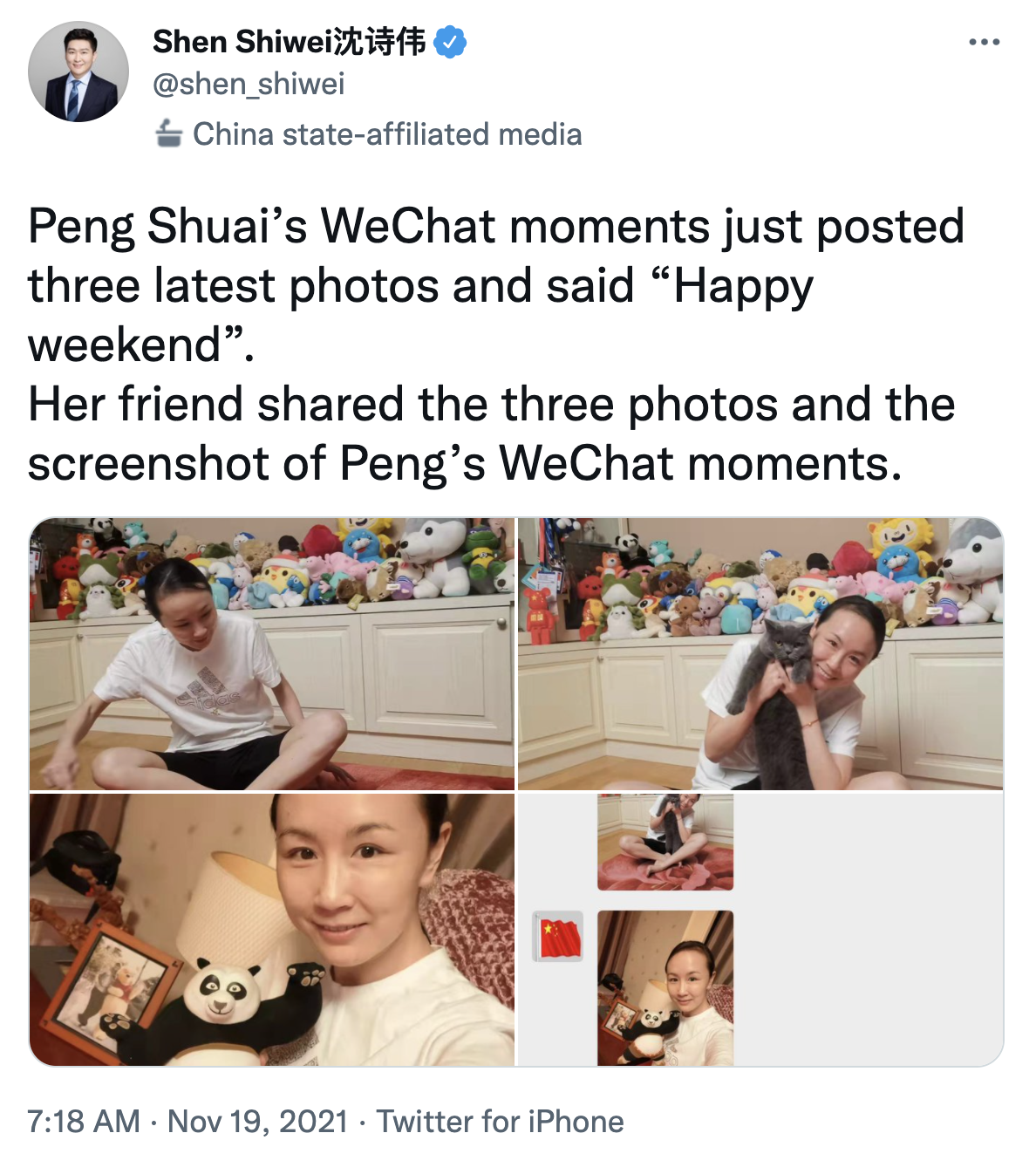 In two images, she is in a room with a pile of stuffed toys and a cat. The cat, objects and setting matched ones that have featured in images Ms. Peng previously posted online, according to a New York Times analysis, offering a degree of credibility to the photos. But it was unclear when and where the photos were taken, and by whom.

Then, Hu Xijin, the chief editor of Global Times, an influential Communist Party newspaper, posted video clips on Twitter showing Ms. Peng at dinner with a group of people at a restaurant in Beijing. In one clip, the director of a major China tennis tournament made an unsubtle reference to the date of a tennis competition taking place the next day — Nov. 21.

The footage came across as heavily scripted, and failed to convince Beijing’s critics.

They “buried their heads in the sand and made these theatrical scenes, one after another,” said Pin Ho, a businessman in New York who owns Mirror Media Group, a Chinese-language news outlet.

He likened China’s propaganda campaign to fire trucks pouring gasoline on a fire, adding that to the outside world, the ham-handed approach could stir unease. “If someone says they’re free, while they’re in the hands of a kidnapper, that is terrifying.”

China’s Ministry of Foreign Affairs declined to comment. The Cyberspace Administration of China did not respond to a request for comment.

When the International Olympic Committee said on Nov. 21 that its president, Thomas Bach, had held a video call with Ms. Peng, Chinese state media journalists moved quickly to promote the news.

They shared the committee’s tweets and statement that said Ms. Peng “appeared to be relaxed” (but made no mention of Ms. Peng’s accusations). 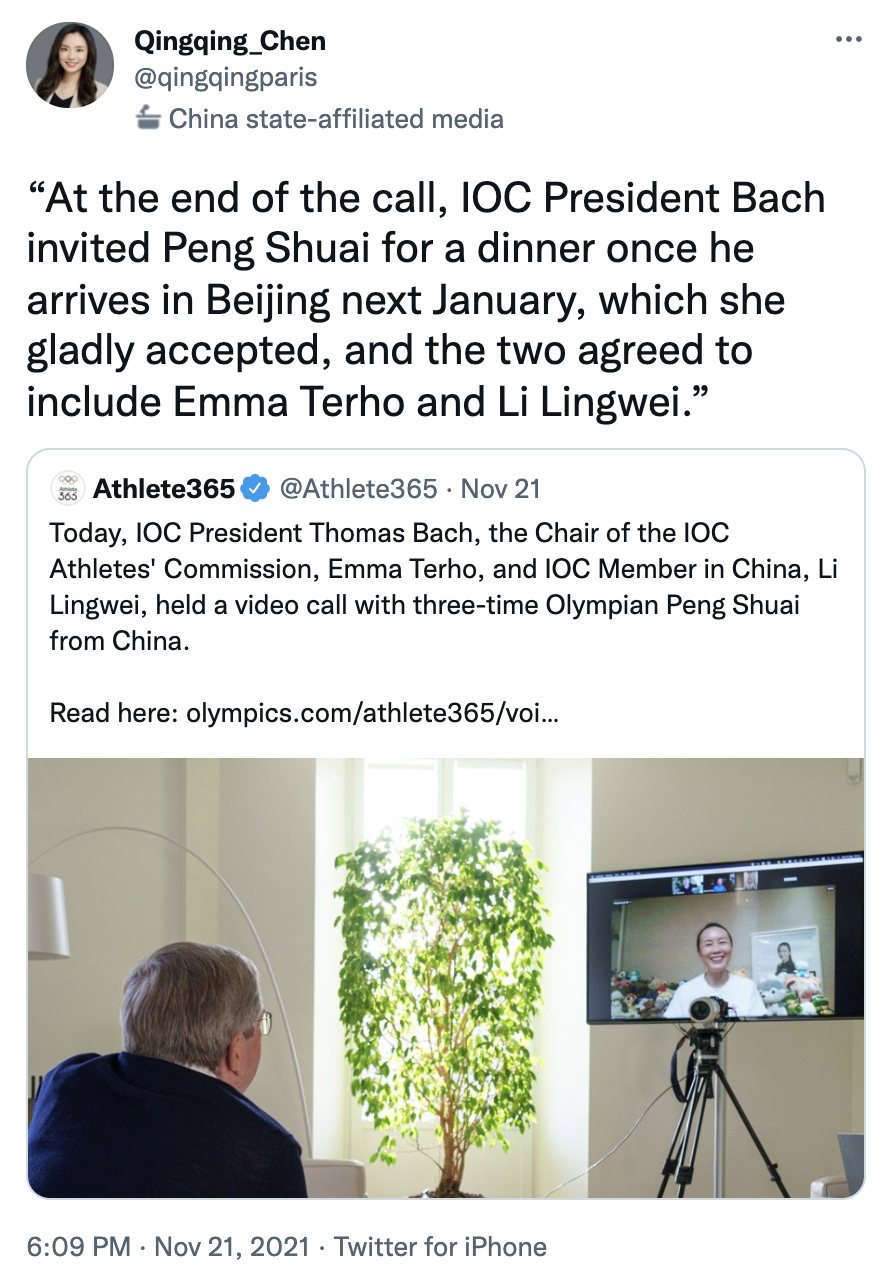 It did little to allay concerns. Instead, Olympic officials faced criticism about their relative silence on Ms. Peng’s allegations. They have said that they are helping with “quiet diplomacy.”

In an emailed response to questions, the International Olympic Committee defended its efforts and said Ms. Peng “could get in touch whenever she deems it appropriate.” It did not answer a question about why it had not publicly mentioned Ms. Peng’s sexual assault allegations.

Unleash an army of fake accounts

In recent years, China has often used fake accounts on Twitter in coordinated campaigns to spread disinformation or bolster its preferred narrative.

Nearly all followed no other accounts and had no followers, an indication that they were created only to amplify others. Many promoted the message that the images of Ms. Peng were proof that she was fine. They were among more than 1,700 Twitter accounts, identified by the analysis, that bore the hallmarks of a covert Chinese information campaign promoting a range of government messaging.

To many other Twitter users, the comments came off as unnatural. “Tennis is Peng Shuai’s career, and her attending events couldn’t be more normal,” wrote a bot-like account called Flora25507875 that joined Twitter in November. (The account is no longer online.)

Twitter picked up on this suspicious activity. Many of the hundreds of posts that shared Mr. Hu’s tweet, for example, have already disappeared.

“What I can tell you is I never knew that there are bot-like accounts interacting with my posts. What you said surprised me,” Mr. Hu wrote in a response to questions about the accounts.

In an emailed statement, Twitter said the company had removed all 97 accounts identified by The New York Times and ProPublica for violating its platform manipulation and spam policies. The company said it was investigating the accounts.

Such accounts may have little traction, but they can help drown out critics and bolster friendly messages, according to past analyses.

There were other telltale signs that these and the hundreds of other analyzed accounts were a part of campaigns to shape public opinion. Together, they posted most of their tweets on weekdays between 8 a.m. and 7 p.m., Beijing time, with a slight lull during lunchtime — a pattern seen in campaigns attributed to China. The accounts had little posting history. More than half of them were less than three months old.

Number of posts by hour of posting

Note: Data includes posts on Twitter between Oct. 1 and Dec. 2 from more than 1,700 accounts identified in The Times and ProPublica analysis as fake or exhibiting coordinated or bot-like behavior. • Source: Twitter

Before some accounts started posting about Ms. Peng, they had focused on topics that have long been the target of other Chinese information campaigns.

Many distributed cartoons and other attacks on critics of the regime, such as Steve Bannon, the former Trump administration adviser. Other posts used hashtags that appeared to target an American audience, such as #StopAsianHateCrimes and #StopAAPIHate. Past information campaigns attributed to the Chinese government have tried to conflate criticism of Beijing with anti-Asian bias.

When faced with public relations challenges, China’s propagandists often turn to another tactic: questioning the motives of Beijing’s critics.

Several reporters from Chinese state media have started lashing out at those who asked for evidence that Ms. Peng was safe and free. Li Jingjing, an anchor with CGTN, suggested that the West was merely looking to use Ms. Peng to undermine China. 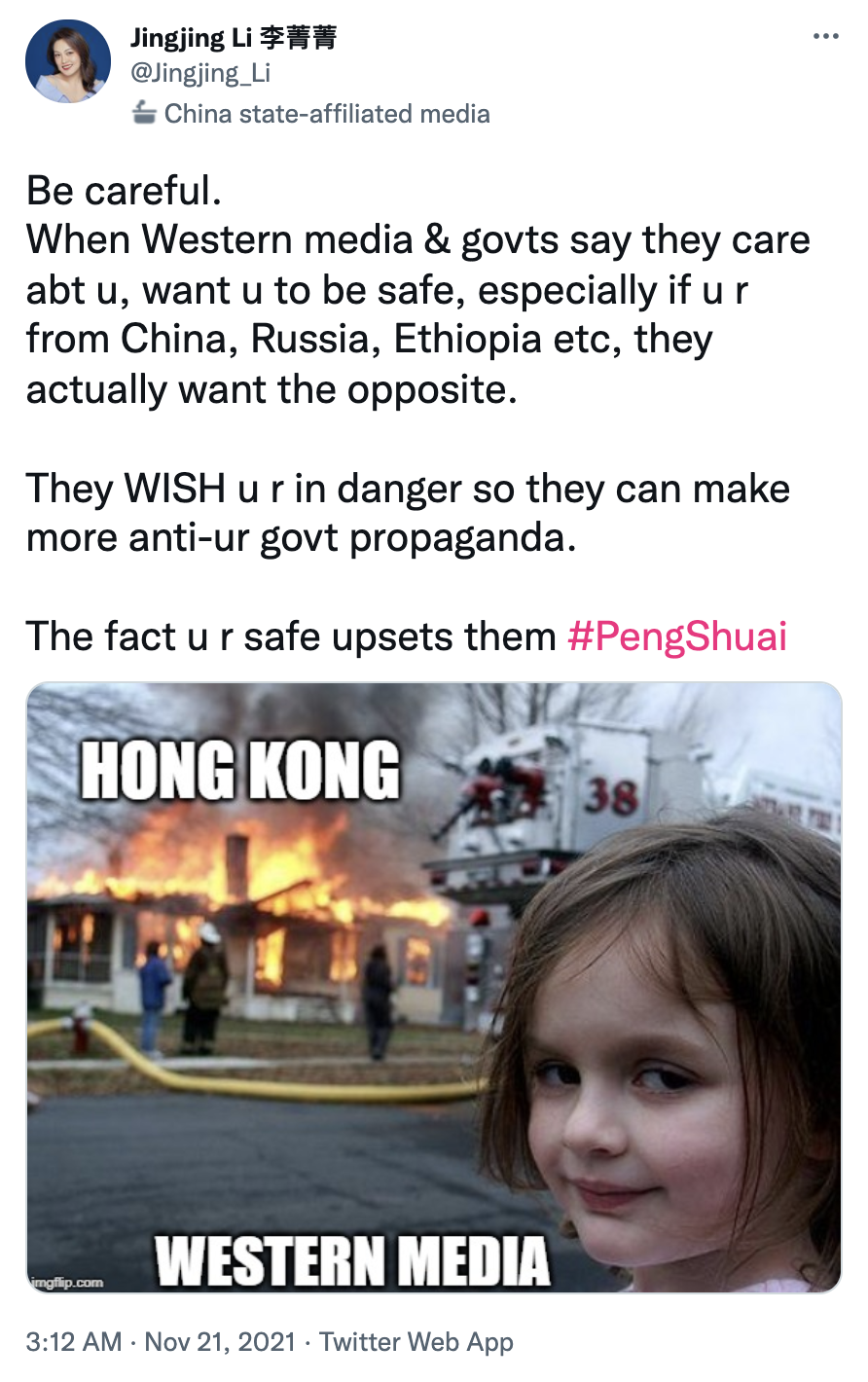 After the Women’s Tennis Association announced its decision to suspend its tournaments in China on Dec. 1, Mr. Hu, the Global Times editor, pushed a narrative with an unusual twist. He accused the tennis organization of forcing Ms. Peng to help the West attack China, and said it was depriving her of freedom of expression. 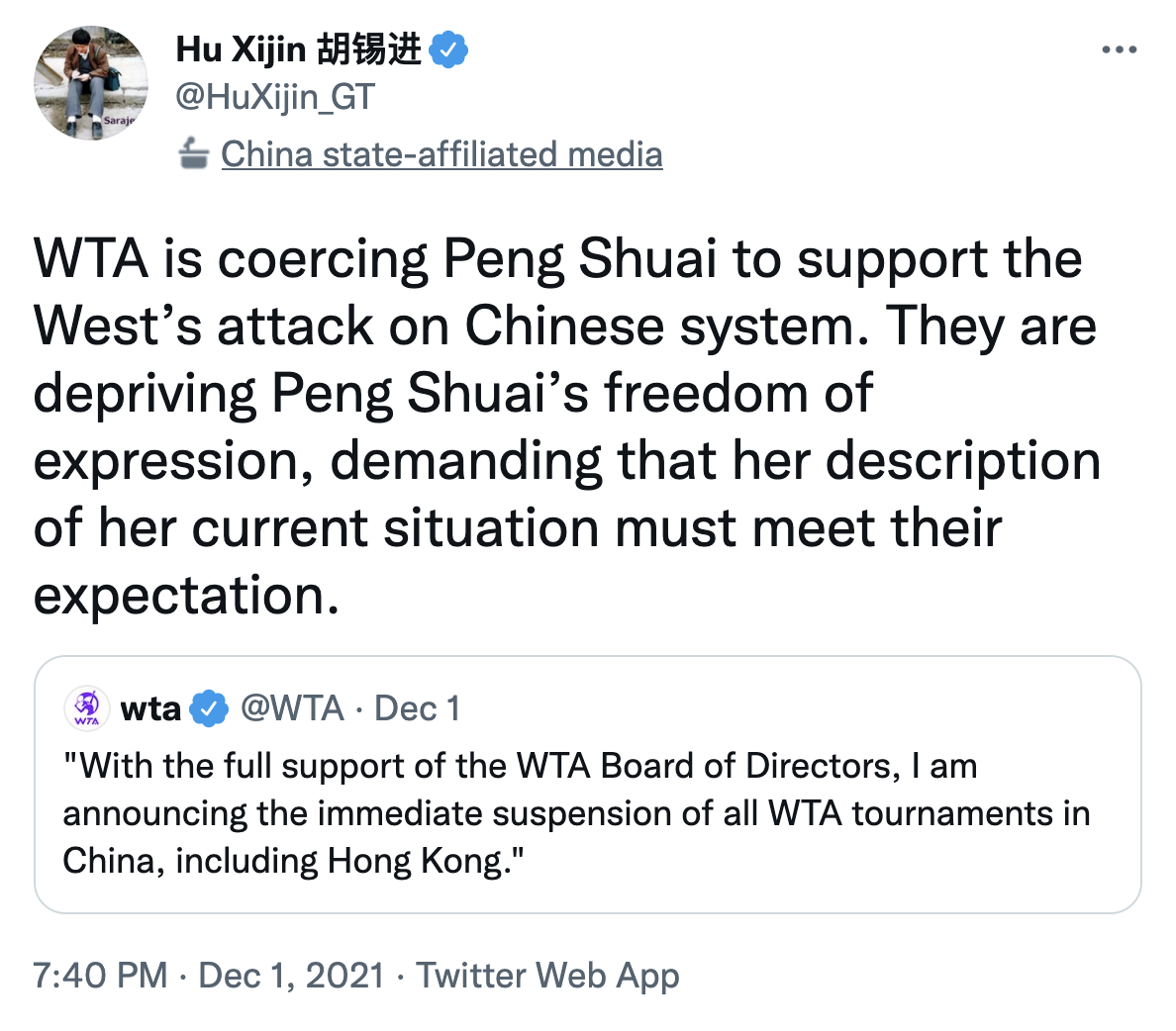 Make it us versus them

In China, the censors on Weibo have continued to expunge recent comments about Ms. Peng, with the notable exception of one: a post from the French Embassy urging China to respect its commitments to protect women.

It became an outlet for nationalist venting. Users lashed out at France, accusing the country of meddling in China’s affairs. One commenter leaned on whataboutism, pointing to recent reports of sexual abuse of minors by the clergy of France’s Roman Catholic Church.

The posts are most likely highly choreographed and curated. A comment on the embassy post left by a Times employee, using a personal account, did not display. At one point, Weibo’s statistics showed the embassy post had been shared 1,600 times, but only some of the most recent re-posts appeared. Many expressed support for the French Embassy.

Within hours, the posts disappeared. 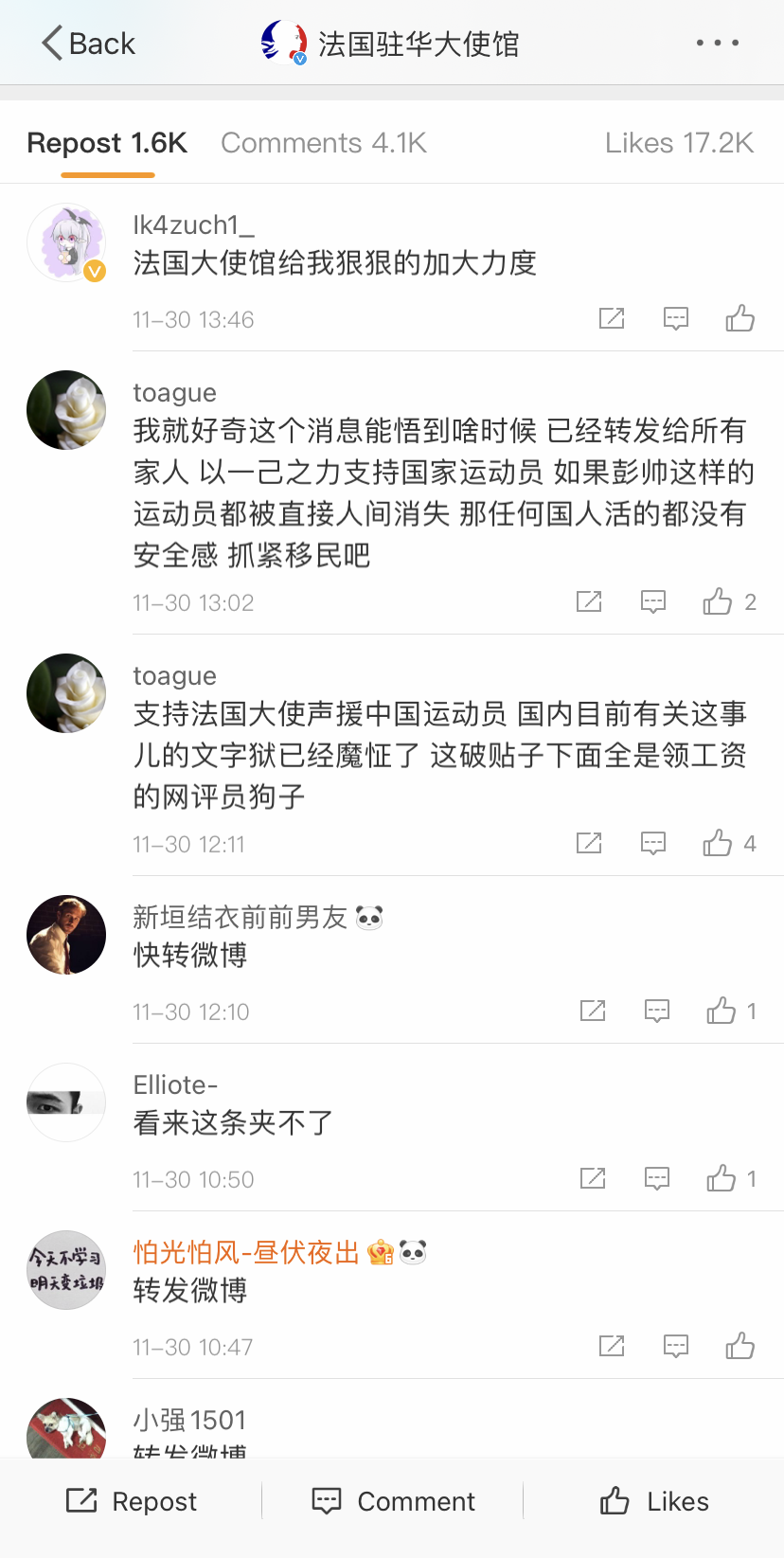 Comments beneath the French Embassy’s Weibo post, many expressing support for the embassy. 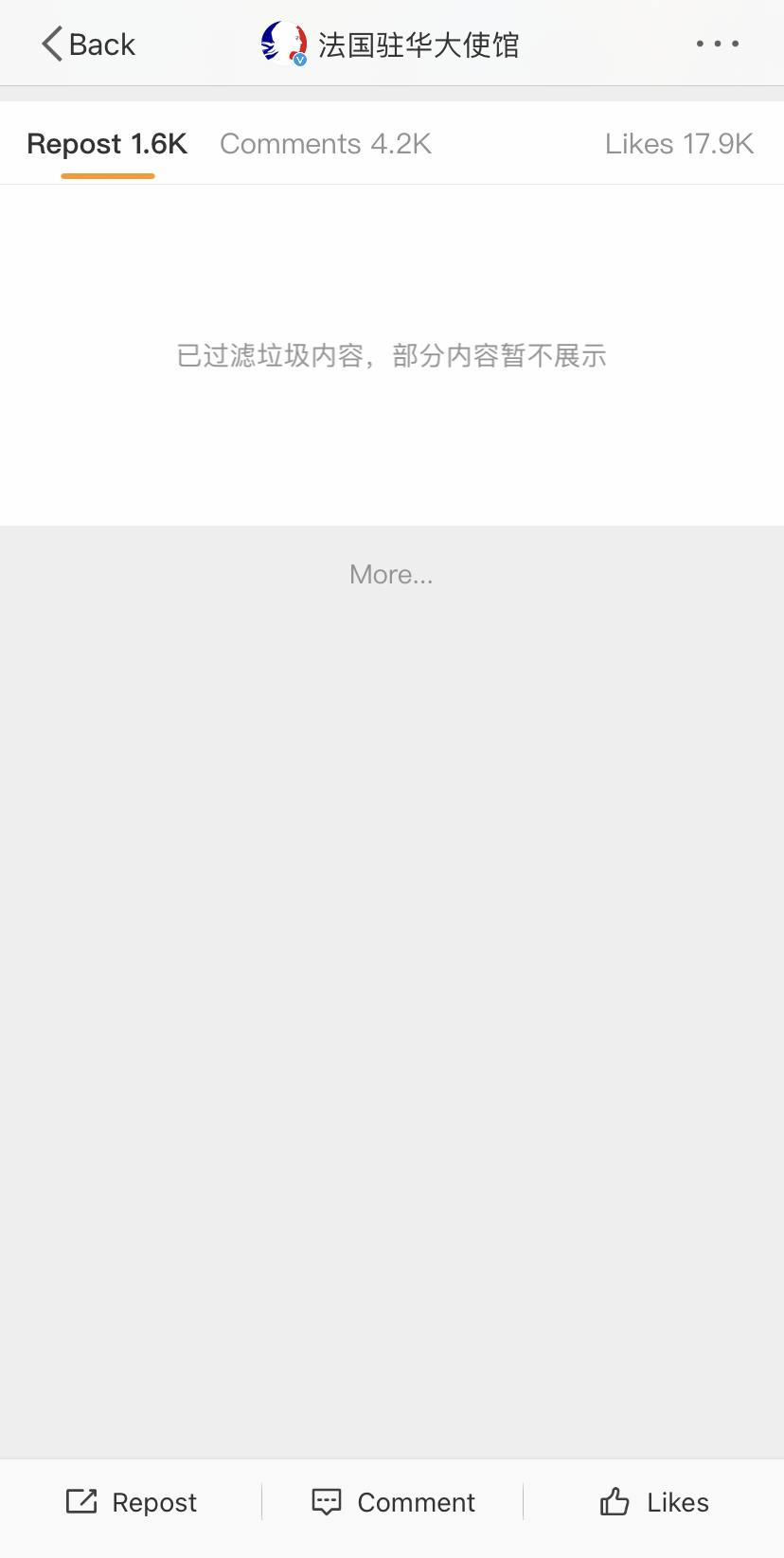 The reposts section after the comments were removed.