For her first big fashion moment, Alexandra O’Neill was locked down, pre-vaccine, and totally alone save for her dog. When newly-minted First Lady Dr. Jill Biden appeared at President Joe Biden’s inauguration in 2021 wearing a turquoise coat and dress designed by her brand, Markarian, she—and the label—became famous overnight. Nearly two years later, when the couple’s granddaughter, Naomi Biden, wore a custom Markarian dress to her wedding reception, seen here for the first time, O’Neill was on vacation with her family, eagerly awaiting the photos that would show her work at the heart of another historic event. 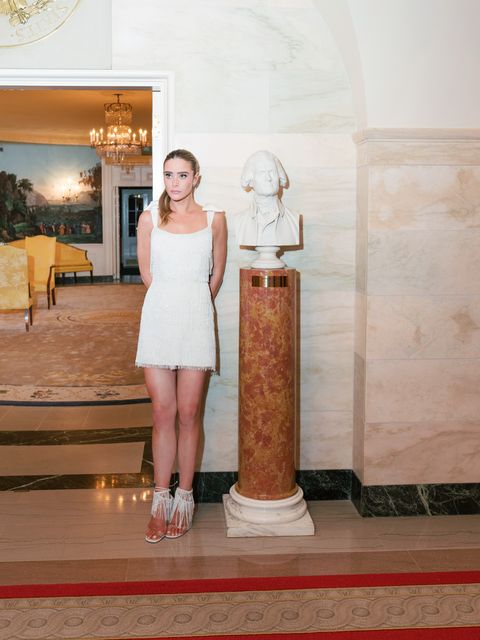 Getting the call that Naomi wanted to work with her on a piece for her after-party was a thrill for O’Neill, and sign of an ongoing relationship with the first family that has been tremendously meaningful for her business and her life. “Their stylist, Bailey Moon, who is so wonderful and who I’ve gotten really close with over the last couple of years, approached us—oh my gosh, was it a couple of months ago?—and asked if we would be interested in working with them again,” recalls O’Neill. “That was a big, big yes, because they’ve been so wonderful to us and so supportive of Markarian, and obviously, we said that we would be honored to work with them again on something so big.” 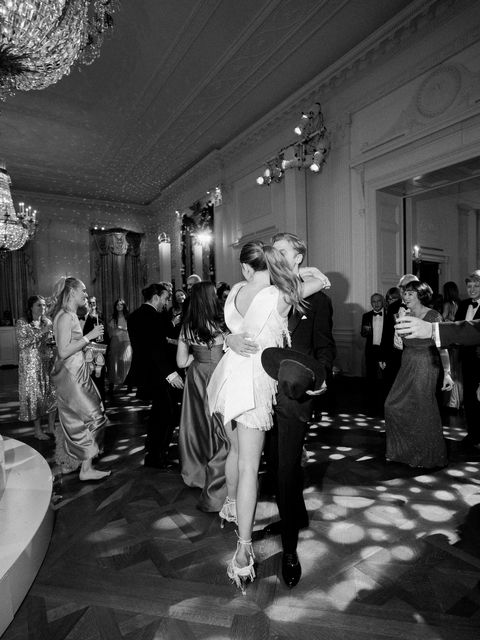 When Biden and Moon visited O’Neill’s studio for fittings, they were very clear about their vision. “[Naomi] wanted something that was fun [and] that was going to be easy to change into after wearing all of her more formal looks for the ceremony and rehearsal dinner. She wanted something that had a lot of movement, that was going to be easy to dance in,” O’Neill says. “We talked about some sparkly looks and some short dresses and something with a little more detail to it, and ultimately settled on a little hand-beaded fringe minidress. We added some really beautiful bows and satin with little trains coming off. It was really kind of the perfect combination of something that was fun, but also special and classic.” Ten of O’Neill’s team members also worked on the dress, which featured hand-done beadwork that was hand-sewn onto the bodice. “We worked really closely together on this,” she added. 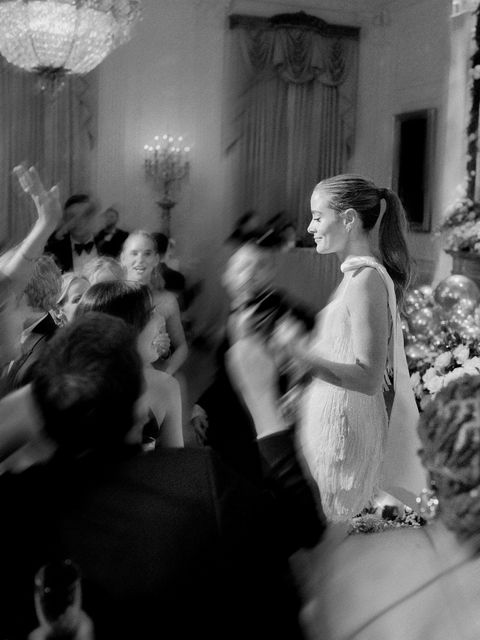 The project was a joy for O’Neill, 36, and an opportunity to work with another young talent whose business was lifted in its early days by the Bidens. “Bailey does such a beautiful, wonderful job with everything, and I am so impressed by him, because that is such a huge undertaking on such a global level.” For his part, Moon only began working as a stylist in 2020, after a career working on the business side of brands like Gabriela Hearst and Rodarte. (The First Lady wore Gabriela Hearst to the evening inauguration celebrations, while Maisy Biden wore a heart-print Rodarte dress that Naomi was also spotted in seven months later.) 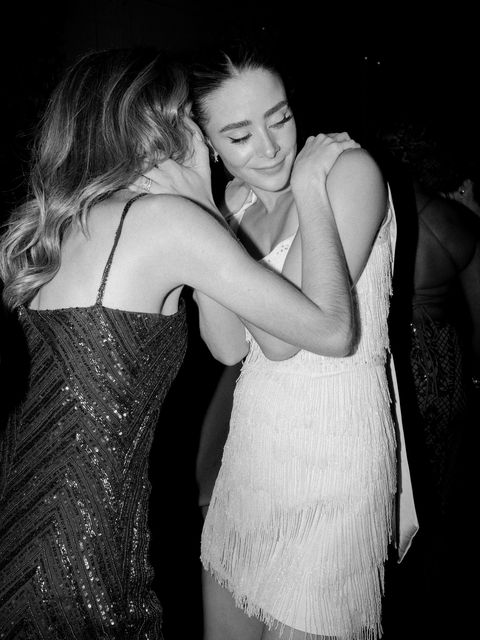 O’Neill predicts the wedding will supercharge her bridal business, just as the inauguration did for her ready-to-wear line. When the First Lady tapped her to design her look for the historic day, Markarian was a nearly four-year-old business that was popular among celebrities, but hardly one with a stronghold on the fashion world. “Few—or none, perhaps—would have predicted that Dr. Biden would walk out into the cold Washington morning on Wednesday in a matching blue coat and dress by Markarian, a small New York City brand whose typical aesthetic signatures include feather trims and full-body sequins,” the New York Times wrote at the time. Moda Operandi reported a 570 percent increase in traffic to Markarian on the site following the inauguration, and retailers saw sales grow by as much as 500 percent, O’Neill told Insider. Less than two years later, her colorful, embellished ensembles have become go-tos for the fashion set.

[The First Lady] understood the impact that decision could have on somebody’s company—or really, somebody’s life.”

Being seen around the world dramatically transformed Markarian as a brand. “You don’t realize until it happens, just how impactful it is. Now that we’re a little bit out from it, I think it completely changed our business. We were really launched into a global spotlight on such a huge scale that it completely changed us, forever,” O’Neill says, of being selected for the inauguration. “I really couldn’t believe it at first. I was so hopeful that it would end up being us and so honored, but I just think it was really wonderful that [the First Lady] decided to choose such a small brand, and it shows that she really understood the impact that decision could have on somebody’s company—or really, somebody’s life.” 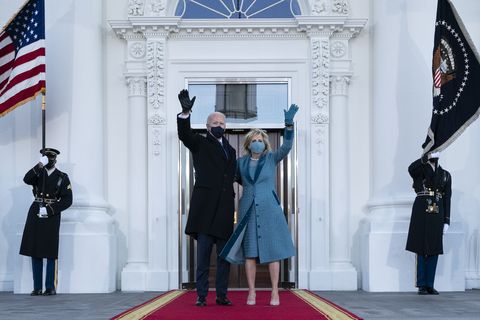 The First Lady wears a coat and dress by Markarian at President Biden’s inauguration.

O’Neill added sparkle to a highly anticipated day, which came during an extraordinarily dreary month full of heartbreaking disease and political violence. Fashion had been all but forgotten for nearly a year, and new looks were few and far between. “[The inauguration] was really special, and it was really a breath of fresh air,” says O’Neill. “It was something that people were really looking forward to and so excited about for multiple reasons. Everybody had been really locked down and at home and not doing anything very exciting, so it was really such a moment for everybody to watch and feel invested in.” 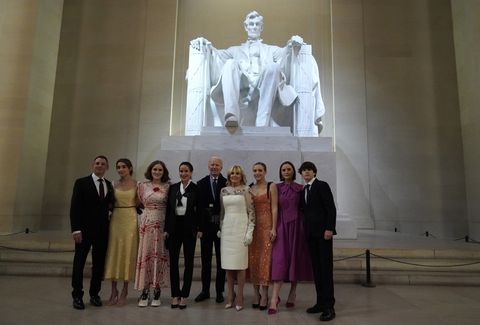 The Biden family on the evening of the inauguration. Natalie (second from left) and Finnegan Biden (third from right) are dressed in Markarian.

The event marked a monumental moment and also signaled a return of fashion to the White House, following a tense four years in which many designers went public about their unwillingess to dress Melania Trump. In her decision to wear Markarian, Dr. Biden made clear that, like Michelle Obama before her, she would be an advocate for the industry, aware that her clothing choices could greatly lift the careers of designers. “I knew that she wanted to work with a female-founded company, she wanted to support a designer that made things in the States,“ O’Neill says. 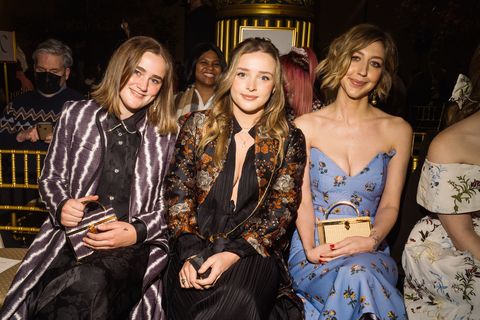 Designing for different generations was nothing new for O’Neill, a Colorado native who was taught to sew at a young age by her grandmother, who lived with her family and nurtured her interest in design. “I’ve always had her in my life. I would make all of her clothing for her, actually. I would make all of her pieces for my brother and sister’s weddings, or for any events that we had to go to, and some daytime looks for her. I would make her coats and everything,” O’Neill explains. That work honed her ability to dress all ages. Several weeks ago, she lost her grandmother, who was 95.

O’Neill is reflective about the way things have unfolded for her, and effusive about her appreciation of the first family’s sustained loyalty to her work. “[The Bidens] have always been very supportive and kind and thoughtful; so easy to work with, which I think is really rare with a lot of clients. They’re very collaborative, but they’re also really great because they choose the people they work with put their trust in them. It’s nice to be able to work with somebody closely on something, but then to also get to do what you do best.”

Adrienne Gaffney is an associate editor at ELLE who previously worked at WSJ Magazine and Vanity Fair.