The internet may love pitting cool girls against each other, but thankfully, Christina Ricci does not.

“I knew there would be comparison between the old [Addams Family] movies and Wednesday,” says the actress, who played the doll-faced moper in the original Addams Family films from 1991 and 1993. “That’s a natural inclination. But the ‘who was a better Wednesday?’ thing is unreal.”

Almost as unreal as the success of Wednesday itself. In its first week, the soapy origin series about Wednesday Addams—now played by Jenna Ortega—surpassed the viewership of Stranger Things, introducing a new generation of Gen Z viewers to the original goth girl while weaving in a pretty great mystery about devious doings at Nevermore Academy, a school for misfits and outcasts that makes Hogwarts look like the Barney preschool. Ricci appears in this Wednesday, too, but this time as a wide-eyed botanist devoted to killer plants and possibly murderous students.

Wednesday has the knowing wink and heightened all-black-everything style that makes it a sure thing for fun adult viewing. But thanks to its nostalgic callback—and Ricci’s original and brilliant performance—the show is also reminding older fans that the “creepy…kooky” heroine is a pretty accurate mood avatar for our current state of stylish exhaustion. Basically, Wednesday Addams is like the side-eye emoji, except in real life and wearing Prada. For those of us who watched Ricci devour the part 30 years ago, seeing the actress back in her element has double the joy. “I’m happy whenever people my age say Wednesday was a big part of their youth,” she says—because obviously, it was a substantial part of hers, too.

With that kind of signature career coup before she could even drive, it’s easy to assume the 43-year-old actress is attached to the role. But Ricci insists Ortega is “truly incredible at making Wednesday a modern badass.” That makes sense, since “modern badass” is indeed Ortega’s thing. The 20-year-old was a breakout talent on You, playing the sly teen thriller writer Ellie, one of the show’s only characters who escapes being murdered herself. Ortega then stayed on-theme with Scream and The Babysitter: Killer Queen. With Wednesday as Jenna Ortega’s first huge lead role, her career takes a big leap forward—and lets Ricci continue to go her own way. “I loved being Wednesday,” Ricci says. “I’m very proud of that role. I also think Jenna Ortega is amazing. She is so brave, so cool, and really doing the part justice. Wednesday is her part now…[and] those two things can be true at the same time!” 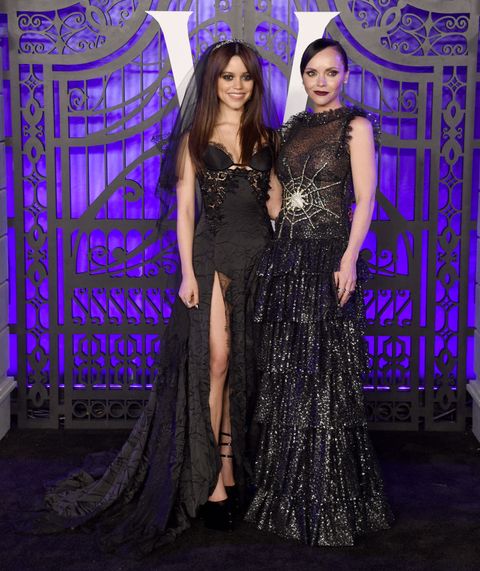 Jenna Ortega and Christina Ricci at the premiere of Wednesday in L.A.

Of course, Ricci has always been an expert at juggling multiple truths onscreen. She was both doll-faced and defiant in her 1990 breakout film, Mermaids, which starred Cher and Winona Ryder as members of her star-studded family. She was ethereal and earthy in Sleepy Hollow; needy and cold in The Ice Storm; sultry and exhausted in The Opposite of Sex. (Then there’s Ricci’s current hit, Yellowjackets, where her killer character’s sneaky silence is louder than most of the dialogue.) “I like a lot of contrasts—in my job and in fashion,” she says. When we speak at the 2022 CFDA Awards, she’s wearing Rodarte: “They’re the coolest, and I really think they’re some of American fashion’s big visionaries. They’re part of such a big arc of incredible talent that’s coming from the U.S.”

Despite being a poster girl for the Council’s greatest hits—Marc Jacobs! Batsheva! Monse! Proenza!—the New Jersey native is blissfully unaware that the youth of today is currently trying to channel her ’90s style on TikTok. In fact, she asks, “What are you talking about?!” when I bring up the onslaught of teen magazine spreads, paparazzi pics, and Now and Then screengrabs that floats across the scroll-o-verse. “I dressed like a little boy back then!” she laughs. “I still do sometimes. People are trying to copy that?” Alas, Ricci can’t provide us (or Depop, for that matter) with her teen wardrobe leftovers. “I have no idea where they are,” she laughs. “[The clothes I wore on photo shoots] were all part of the job for me. I never even though to ask for them…but maybe, now that you mention it, I should have.”

Ricci is equally amused that Casper is getting the Twitter treatment, with more than a few old millennials naming the 1995 movie as the first time they ever had a crush—with half pinning Ricci as their object of affection, and the other naming her co-star Devon Sawa. “I love that people are still watching that movie!” she says. “But being in it, no, I did not feel those things.”

Christina Ricci did feel thrilled, however, that legendary costume designer Colleen Atwood, whom she worked with on Sleepy Hollow, brought her magic to the current Wednesday cast, even sourcing an Alaïa couture gown for Ortega to wear in the pivotal prom scene. As for Ricci, “I loved the giant glasses my character got to wear—I truly felt like a different person wearing them. Fashion should be fun and transformative. And I’m very lucky that with Wednesday and with some red carpet moments I get to do, I’m encouraged to use fashion to help tell these big stories.”

In other words, with the success and style of Wednesday, Ricci and Ortega get to keep their epic fashion moments all in the (Addams) family.

“Her beauty and her brain go not together.” —William Shakespeare