Keke Palmer and her boyfriend Darius Jackson spent their Monday night watching the New York Rangers play at Madison Square Garden, and the pregnant actress was glowing alongside her partner. Palmer wore a lime green hoodie and blue baseball cap with green-rimmed glasses. The two held hands and generally appeared very loved-up together in front of the arena cameras. 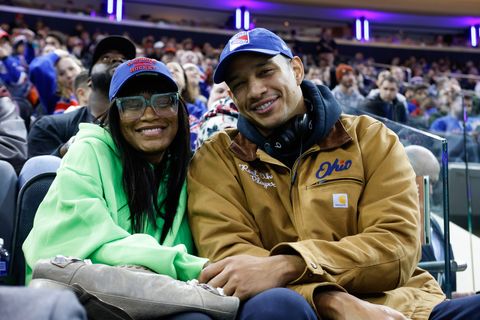 The date night comes just two days after Palmer announced her pregnancy while hosting Saturday Night Live. “I’m especially glad to be here though, because there’s some rumors going around,” Palmer started. “People have been in my comments saying ‘Keke’s having a baby,’ ‘Keke’s pregnant,’ and I want to set the record straight. I am.” She then opened her blazer and revealed her pregnant stomach.

“I’ve gotta say though, it is bad when people on the internet spread rumors about you, but it’s even worse when they’re correct,” Palmer continued. “I was trying so hard to keep it on the down low, because I’ve got a lot of stuff going on. People kept coming up to me [saying] ‘Congratulations,’ I’m like ‘Shh! Can y’all stop, I’ve got a liquor sponsorship on the line. Let the check clear, then we can get to the damn baby shower… But honestly, this has been the biggest blessing, and I am so excited guys—I’m gonna be a mom!”

Palmer reflected on her experience hosting SNL and sharing her pregnancy in a candid Instagram post, giving Jackson a heartfelt shout-out at the end. “Thank you to my other half @dvulton for giving me the things that only true unity can bring,” she wrote. “Love is all we have isn’t it, you do nothing in this world alone and trust me, I am not alone!” Read the caption in full here:

I had such an amazing time hosting SNL! Truly such a unique experience, I learned so much. The cast was incredible, I was so happy to be taken into their home for such a short time. Being around so many others that appreciate and put their all into their craft was especially fulfilling. I love to preform so much.. I love bringing laughter and good vibes and just taking us all away for a moment. Even if not just for myself, but for whoever wants to join. I thank Steven Higgins and Lorne Michaels for sharing their insight with me, I was soaking up every minute. I love being around the goats chile! Forever a student… Who could’ve told little me that I’d be on stage with @kenanthompson and @iamkelmitchell for a Kenan and Kel/Kelly reunion 🤪—I would’ve passed out. These brothers are ICONS. Talent like theirs is hard to come by, there’s a reason why we loved that show and it’s cause they knew what they were doing. Even as kids! Thank you @nbcsnl and also the WRITERS! The incredible writers that give and give and give everyday, no matter what you see or what you don’t see these people put their hearts into it. Art is your heart so it isn’t always easy, but they still get out there and that’s just amazing.

This year has taken me for a ride! And how cool, my baby and I are already doing it all together. Thank you God! Thank you to my amazing parents and family who continuously support me. Thank you @noraradd for being my spiritual sister as ALWAYS! You feel me my little Pisces moon 🥹. Thank you to my team who have been constantly reaching and moving mountains to extend the reaches of my gift, and thank you to my other half @dvulton for giving me the things that only true unity can bring. Love is all we have isn’t it, you do nothing in this world alone and trust me, I am not alone! Very grateful… Happy Holidays!

Alyssa Bailey is the senior news and strategy editor at ELLE.com, where she oversees coverage of celebrities and royals (particularly Meghan Markle and Kate Middleton). She previously held positions at InStyle and Cosmopolitan. When she’s not working, she loves running around Central Park, making people take #ootd pics of her, and exploring New York City.