Before Prince Harry decided to propose to Meghan Markle in November 2017, the royal heir had tried-and-true long-term relationship collateral to depend upon: a dog. In the new docuseries Harry & Meghan, the prince jokes that he wasn’t positive the Suits actress would accept his engagement ring, but he figured odds were in his favor given that Guy, Markle’s pet beagle, was staying at his place. “She’d already moved Guy over,” Harry said. “So I had Guy as a hostage.” In the series, part of the couple’s headline-making deal with Netflix, the couple reveals their full engagement story, including the important role Guy got to play during the proposal.

After asking his grandmother—the Queen—for permission to wed Meghan, Harry arranged 15 electric candles in the north garden outside Nottingham Cottage, his home within Kensington Palace. On that romantic November evening, as the couple cooked dinner inside, Harry popped a bottle of champagne—immediately triggering his future bride’s suspicions.

“I did pop a bottle of champagne while she was greasing the chicken and that kind of slightly gave the game away,” Harry says during episode 2. “She was like, ‘You don’t drink champagne. What’s the occasion?’ I was like, ‘I don’t know. Just had it laying around here, whatever.’”

Meghan adds, laughing, “It was a magnum.” 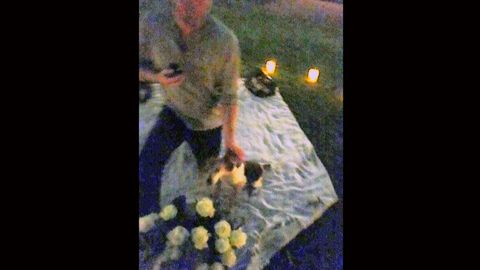 In the garden, Guy—with both of his front legs still bound in casts—sat beside Harry, providing emotional support as the prince asked Meghan for her hand in marriage.

In Harry & Meghan, an interviewer asks “what position” Harry was in during the proposal, to which the prince deadpans, “Downward dog.” 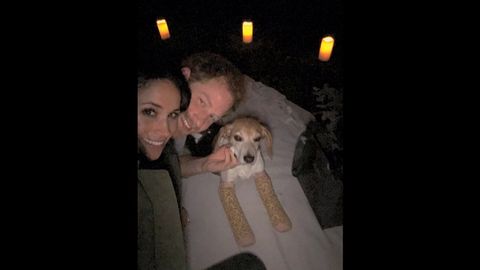 A friend, Lucy Fraser, also reveals in the documentary that the couple hosted an engagement party afterward, during which all the guests dressed in animal onesies. Meghan and Harry wore penguin suits, since penguins mate for life. That’s cute and all, but the real question remains unanswered: What did Guy get to wear?

Lauren Puckett-Pope is an associate editor at ELLE, where she covers film, TV, books and fashion.